Earthworks: BV or not BV?

Earthworks brought an end to its status as a 'besloten venootschap' (BV) at the end of 2018, marking another stage in the transition to purely curiosity-driven research. In 2019, the main thrust of this will be directed towards the new Gondwana map project, IGCP-628, and improved models for Gondwana dispersal.

Colin's independent project activity started in March 2001 when his appointment at ITC became less than full time, following the relocation of ITC's 'Delft' activities to Enschede.  In December 2002, independent office space was secured on Lange Geer in Delft and his effects were relocated there in January 2003, after the Delft  ITC building had been cleared. Colin retired fully from ITC in December 2004. The present, larger, office space was acquired in August 2006 following the commencement of the airborne survey project in Nigeria that was to continue over many years.  The BV was also set up at this time.

The last of many ensuing projects - managing the interpretation of the new airborne geophysical coverage of Malawi - was completed early in 2018, bringing an end to 12 years of commercial consutling activity as a BV.

The plaque, pictured below, is a gift from Colin's daughter Suzanna to mark this event.  Suzanna, the one and only employee of Earthworks BV, worked the summer of 2010 digitising global geophysical data that is still in daily use, guiding the interpretation of global tectonic processes.  The business affairs of Cambridge Paleomap Services Limited were also wound up during 2018.  The CPSL 'Atlas' plate rotation software, with a pedigree stretching back more than 40 years, nevertheless continues to perform perfectly, underpinning the on-going research effort. 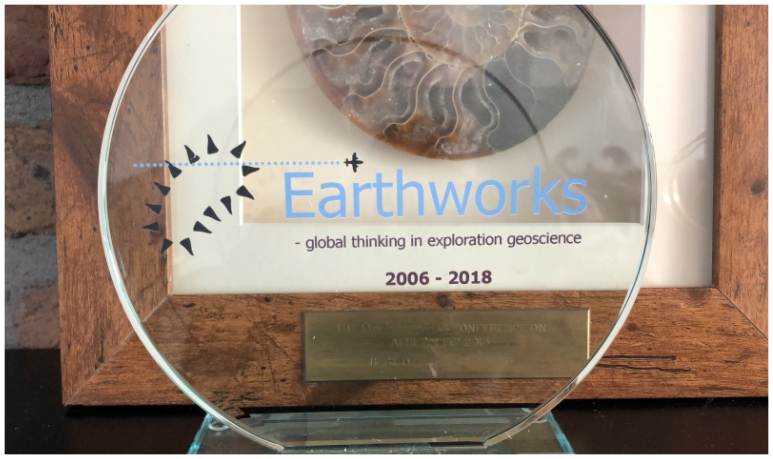