Geophysics in Botswana, 40 years ago

At the request of the Geological Survey of Botswana I have retrieved a selection of 35 mm slides from my archives to tell the story of how regional geophysical surveys got started in the Kalahari. The work began with geophysical studies in the Okavango delta (gravity, seismic refraction and micro-seismicity) and later extended into a national gravity survey and aeromagnetic reconnaissance of the sand-covered regions. The slide collection may be viewed at the web-album address here.

A short descriptive text appears below.

I arrived in Lobatse late in the evening of January 1, 1970 at the end of a 34 hour train journey from Cape Town that had followed a 10-day ocean voyage from Southampton, England. I think that that was the hottest day I ever experienced in Botswana! I was met from the train by Chris Jennings and, complete with all my luggage, taken to the Cumberland Hotel. This was to be my home for many weeks as my entitlement to government housing took some time to fulfill.

De Beers were busy starting the development of the Orapa diamond mine at this time and enhancing the supply of surface water to the mine through accelerating the flow of the Boro River in the Okavango Delta in order to fill the Mopipi Pan near the mine (via the Boteti River) was the strategy of the time. The Geological Survey felt it needed to know more about the Okavango Delta and sent me to Maun after a few weeks to undertake some gravity traverses across the fault lines that marked the SE edge of the delta. Mr ‘Burgy’ Burgoffer, GS diamond driller, was already in the area and met me at Maun airfield. I had never flown before! I stayed at Riley’s Hotel – my first experience of a colonial-style hotel in Africa.

A few days of fieldwork showed interesting anomalies across the fault lines and I was sent back with a full field support camp to do more work on April 1 that year, very shortly after I had finally acquired a permanent place to live in Lobatse, in the flats opposite the Geological Survey. This field effort finally extended across the whole six month season until October 1970. I was constantly concerned that the work would be cut short by other priorities and I became utterly exhausted after months of field living and many kilometers of travel on primitive tracks. The time was also filled with new experiences of African wildlife, the limited facilities of Maun for replenishing stores and the fascinating flooding around Maun in June and July as the floodwaters from Angola brought these rivers to life at the height of the dry season. I travelled extensively to the NE and SW along the base of the delta and executed whatever traverses could be made at right angles to the strike of the fault lines. An early excursion was along the length of Chief’s Island, before it became inaccessible with the rise of the annual flood waters. Sleepless nights, concerned about the possible appearance of lions in camp, contributed to the excitement.

Prior to my time in Lobatse, geophysics in the GS had been confined to local studies for groundwater and mineral exploration. I had the feeling that this would never grow into the contribution regional geophysics could make to exploring the solid geology hidden below the three-quarters of Botswana that were covered by the Kalahari Sand. Pursuing this possibility with gravity and aeromagnetic surveys eventually initiated many years of systematic geophysical mapping efforts in Botswana, most of it by air.

Back in Lobatse, October 1970 brought the traditional summer season of unpredictable rain and geologists in the office writing up their field results. Settling in again revealed the desperate shortage of professional staff and the imminent return to England of several long-serving geological mapping officers like John Bennett and Dick Crockett . GS Director Colin Boocock – already on staff in Lobatse for, I think, 22 years – also announced his intention to resign and move back to South Africa. For a time there was just myself and a few other junior staff members all told! Nevertheless, the Okavango gravity work was considered of high importance and I was sent back for a second, much shorter, field season in August-September 1971. This time I had the support of technical assistant Frank Bicheno and the programme was to include some more ambitious traverses – by small open boat into the delta itself (courtesy of UNDP) and around the north and west of the delta. This work was eventually written up as GS Bulletin 11 – The Gravity Survey of Ngamiland, 1970-71 [2].

At the end of the 1971 field season, my return to Lobatse coincided with the arrival of a whole new cohort of professional staff from the UK, led by John Hepworth as the new Director. This quickly led to a new lease of life for many GS activities and geophysical reconnaissance was no exception, now supported by a second geophysicist, Dave Hutchins, who was to contribute to the GS for many years to come. The gravity work in Ngamiland was expanded to the idea of executing a gravity survey of the whole country – the National Gravity Survey or ‘Natgrav’.  This was carried out between August 1972 and December 1973 with financial support from the UK Government. The work was made up of three phases, not necessarily in this order:  (1) A network of national base stations was needed and 23 points were established by flying two Lacoste and Romberg gravimeters between these points and international base stations in Johannesburg and Livingstone, Zambia. This took two weeks flying with Cessna aircraft Zulu Golf Charlie. (2) Then there were the routine ground observations along all motorable tracks at 10 km intervals – at an average of about 8 new stations day to a total of about 2500 points. This was the bulk of the work and took 18 months and 45 000 km of driving. (3) Finally, the least accessible areas of the Central Kalahari and the SW corner of the country were filled in by helicopter transport [3]. In all these operations, position-fixing was the most demanding aspect. A primitive magnetic land navigator was used on the main survey Land-Rover and some of the earliest satellite imagery (Landsat 1) was also pressed into service. The efficiency of helicopter operations convinced me that ‘airborne’ was the only way ahead for geophysical reconnaissance programmes in the future.

Support for these efforts came from the British Geological Survey, or the Institute of Geological Sciences as it was then called. Richard Carruthers assisted with the gravity base station network and he was joined by Peter Greenwood to execute a seismic refraction survey in the Okavango delta to follow up the result of the gravity survey [1]. ‘Okaseis’ was carried out in 1973-4 at the height of the hot season. Getting explosives to Maun was a major part of that task! Huge charges had to be used because the Kalahari Sand proved very absorbent of seismic energy. After I left Botswana, Chris Scholz did further work investigating the seismicity of the Okavango Delta [4].

By the start of 1974, the end of my second contract in Lobatse was in sight and I was luckily able to pursue the completion of the National Gravity Survey as part of a PhD study at the University of Leeds where they still had an Institute of African Geology. Remember, there were no suitable computer facilities in Lobatse at that time. That work kept me busy until October 1976, two years after I stopped living in Lobatse. Bulletin 5 – The National Gravity Survey of Botswana – was part of that output [3].

John Hepworth had also been successful in interesting the Canadians in helping with an airborne magnetic reconnaissance of the Kalahari and Norm Paterson came on a visit to advise on the specifications for such an exercise early in 1974. This ‘CIDA’ survey was carried out in 1975-6, some 18 months after I left but, by the time I had finished my PhD, I had been offered a job with Geoterrex in Ottawa and found myself working on the compilation of that Botswana aeromagnetic survey and its publication. Eventually Geoterrex also got the job of interpreting these results and I worked on that in Ottawa, with help from Dave Hutchins (who had taken over my role as leading geophysicst in Lobatse), from about September 1977 until mid 1978. The report that emerged became something of a milestone in the exploration of Botswana’s geology and has been reprinted several times [5].

For me, my long involvement with Botswana ended in 1978 when I left Geoterrex and joined Paterson Grant and Watson in Toronto and moved on to parallel problems of using geophysics to map hidden geology in many other parts of the world. This has included a great deal of work in other parts of Africa as well as in India, Australia and elsewhere. But the lessons learned in Botswana have lasted a whole lifetime of professional activity. And Botswana still sets an excellent example of what could be achieved in many places where the geology does not lend itself to mapping by the traditional methods of field geology. 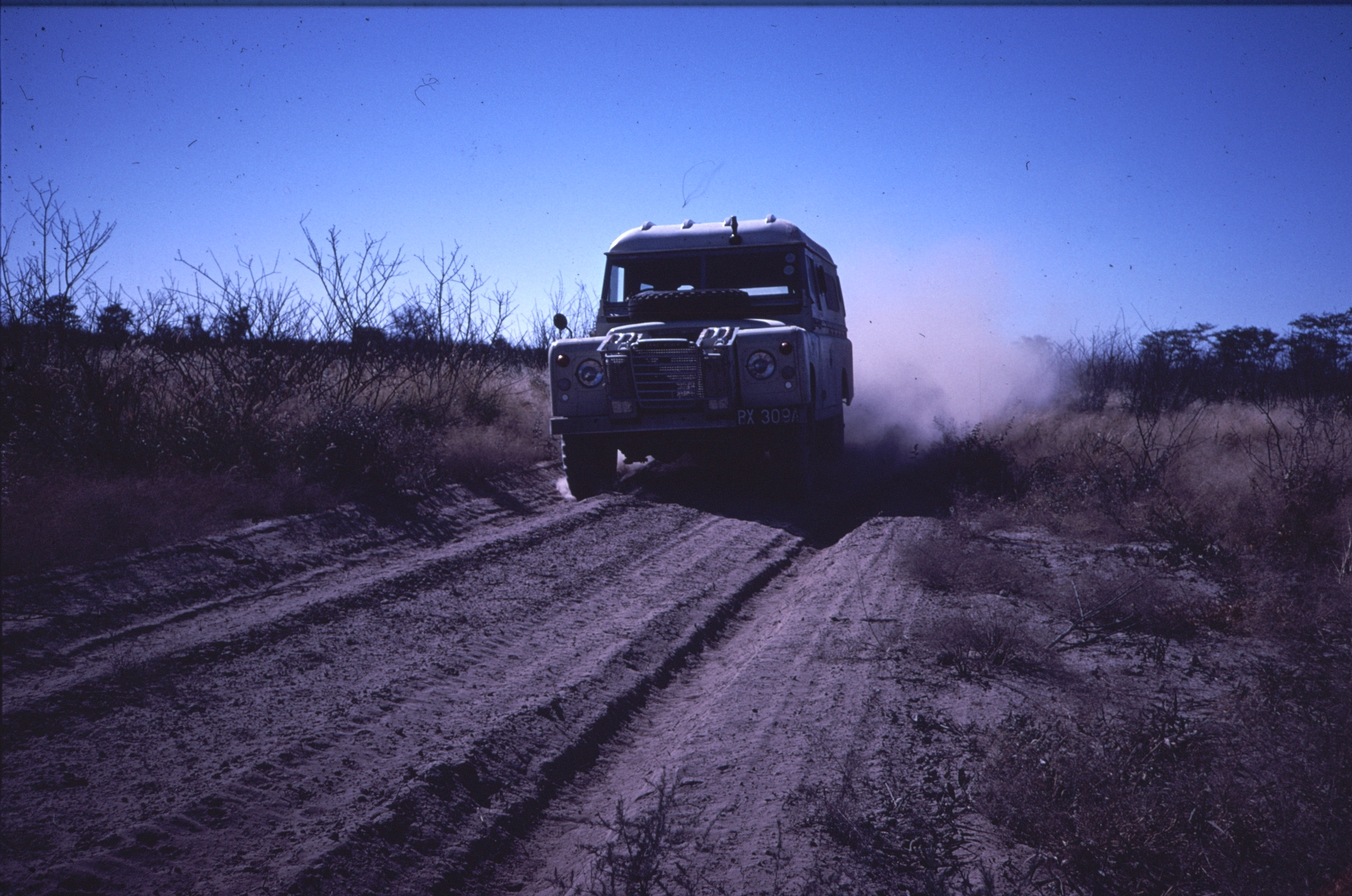