A tribute to Dr Alan Smith

Dr Alan Smith passed away in Cambridge on August 13, aged 80.  Alan was a pioneer in the early days of plate tectonics, working with Edward Bullard and Jim Everett at what was then the Department of Geodesy and Geophysics at Cambridge on the first computer-generated fits of the continents around the Atlantic Ocean. The first fit was published in the Proceedings of the Royal Society in 1965, at a time when many respected authorities - such as Harold Jeffreys at Alan's Cambridge college - disputed that continental drift was at all possible.

I was lucky enough to have Alan as one of my final year undergraduate supervisors in 1968.  I learned a great deal about doing sound earth science from his approach of posing penetrating questions that would undermine dubious ideas.  And always with a wry sense of humour that made him exceptionally good company. We met again in later years and I attended a short course he gave in the early 1980s, showcasing the plate-reconstruction software 'Atlas' that I have been using since 1994.  We met routinely on my visits to family in Cambridge over the past 25 years and enjoyed memorable walks together in the English countryside and visits to Cambridge curry houses. I will miss him greatly.

The picture below is from his obiturary in The Daily Telegraph on August 24.  To see Alan in action with his original computer-generated maps, follow the following link: 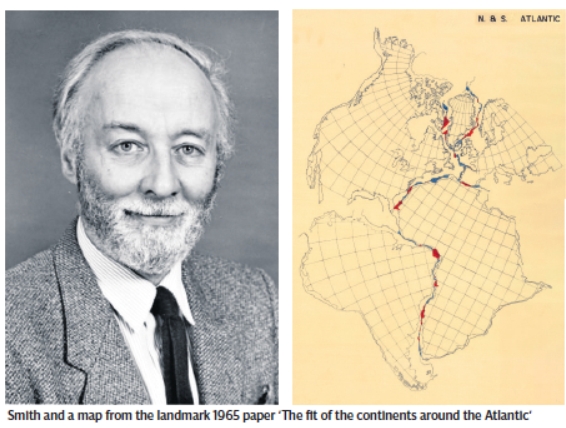