The most recent developments to the Earthworks Gondwana dispersal model have been used to derive two series of high-resolution images that are released today [here].  The model, CR20ABAW, incorporates the most recent thinking on the early opening of the South Atlantic Ocean, the articulation of Patagonia by closing the Early Cretaceous rift basins there and the refinement of movements along the Agulhas fault zone off the coast of South Africa and its newly-defined conjugate in South America. The rationale will be explained in a future Research Update.  Meanwhile, the main points will be set out in a poster presentation at the Netherlands Earth Science Congress [nacgeo.nl/] in Utrecht, March 12-13.  The abstract accepted for the poster presentation is given below and the poster itself in an A4 version may be accessed [here].  The poster was shown shortly before the congress was cut short by measures to contain coronavirus. The geology shown in the accompanying figure is courtesy of the Gondwana Map Project (IGCP-628).

African geology, the Bouvet mantle plume and the early opening of the Gondwana margins

Fifty years of detailed geophysical mapping of Africa’s hidden geology (in support of logical resource development policies) has revealed many continental-scale features of global significance.  These include one of the world’s largest dyke swarms (Okavango, 178 Ma), the Morokweng meteorite impact (145 Ma, Jurassic-Cretaceous boundary) and new intra-continental rift systems and shear zones (135-128 Ma).  In the context of the new geological map of re-assembled Gondwana (IGCP-628) this has led to a refined model of Gondwana break-up and dispersal in Jurassic and Early Cretaceous times.  Essential to the geodynamic model is interpretation of ocean-floor topography derived from satellite gravimetry in conjunction with sparse marine magnetic anomaly data from before the Cretaceous Quiet Zone (84-126 Ma).  The ongoing role of the Bouvet mantle plume emerges as the central theme to this process, from the initial large igneous province (circa 183 Ma), through a ridge reorganisation at 135 Ma to the eruption of the Iceland-like Agulhas plateau basalts at about 100 Ma, as well the subsequent history of the associated triple junction.  Whereas the outbreak of the Tristan plume (135 Ma) is often given credit for the opening of the South Atlantic  Ocean, the more southerly parts of the proto-ocean were manifestations of pre-135 Ma Bouvet plume activity.  The geodynamic model is illustrated by animations, also available on the website http://reeves.nl/gondwana.  Delineation of sub-plates within the Patagonia region of South America remains enigmatic. 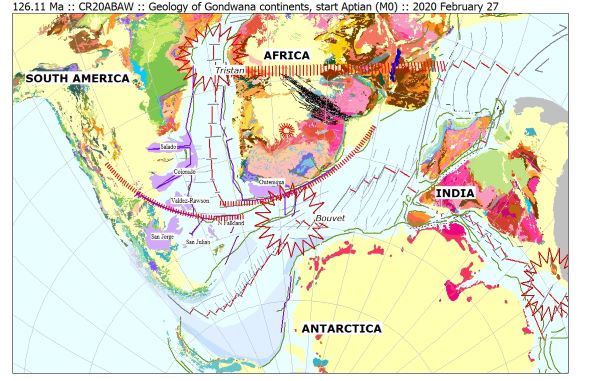